How Russia’s Invasion of Ukraine Is Already Rippling Through the U.S. Housing Market 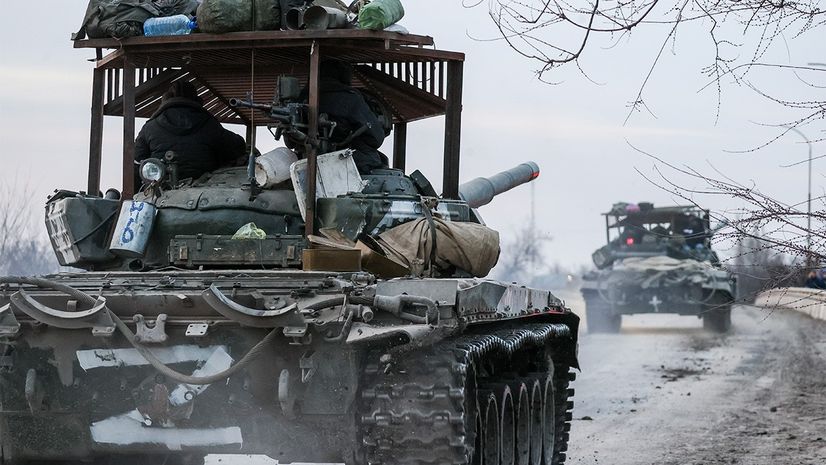 Russia’s deadly invasion of Ukraine has set much of the world on edge, with many fearing this could become the largest conflict since World War II. Russian airstrikes battering Ukrainian cities and bases have already roiled financial markets around the globe, rippling through the U.S. housing market.

Mortgage interest rates, which had been expected to keep inching up, instead retreated slightly, according to the latest Freddie Mac data. The stock and cryptocurrency markets, where many buyers pull money from to purchase property, tumbled. And ultimately, the already accelerated rate of inflation is expected to rise even further—hurting renters, buyers, and even builders who will continue to grapple with fast-rising construction costs.

“It’s all bad for the economy and housing. … It’s just a matter of how bad,” says Mark Zandi, chief economist at Moody’s Analytics. “There’s a number of different ways in which Russia’s actions will hurt housing.”

By just after 1:30 p.m. ET on Thursday, the S&P 500 was down more than 12.5% year to date, recovering a bit from the morning. Nearly half of that loss came in just the past five days as tensions escalated along the Ukrainian border. Stocks began rebounding Thursday afternoon after President Joe Biden announced more sanctions against Russia.

While that’s a substantial loss, it’s not a meltdown like what happened in the 2000s, when the markets lost more than 50% of their value.

“Investors tend to overreact to bad news and then settle down,” says Robert Dietz, chief economist of the National Association of Home Builders.

This may have a larger impact on the luxury real estate market, where wealthier buyers often cash out stocks or cryptocurrency to purchase multimillion-dollar homes or second or third abodes. However, the uncertainty may also make buyers in all price ranges hesitant to pull the trigger on large purchases such as real estate.

For now, the uncertainty in the stock market amid fears of a full-blown war in Europe is helping to keep mortgage rates in check.

Many investors moved into the bond market, which includes mortgage bonds, as they are generally considered safer, less volatile investments. Bond prices rose as a result. And when prices go up, mortgage rates typically fall.

Rates averaged 3.89% in the week ending Feb. 24, according to Freddie Mac. Instead of cracking 4%, rates dipped slightly from 3.92% in the previous week.

And if buyers aren’t worried that they have to purchase a home now before mortgage rates go up any further, it could relieve some of the urgency in the market. This could lessen demand in the short term, resulting in reduced competition among buyers.

“That would affect the market at all price points,” says Hale.

However, the jury is out on whether rates will stay lower. Moody’s Zandi believes they may rise as a result of the turmoil and ensuing inflation.

Another potential fallout for Americans is rising oil and gas prices, as Russia is the second-largest oil producer on Earth. While that is expected to affect prices at the pump and home heating costs, it’s also likely to make goods more expensive. That’s because food, products, and building supplies often require oil in their production. Then they need to be transported around the nation, or even the world, to wind up on store shelves.

“If oil prices go up, that raises costs throughout the economy,” says Hale. “It means more inflation.”

This could potentially lead to job losses, warns Zandi, if Americans pull back on their spending. He’s not expecting another recession, but he’s not ruling one out either.

There are also likely to be more global supply chain disruptions.

“That’s a real problem for homebuilders,” says Zandi. “They can’t build to meet demand because they can’t get the building materials and appliances and the things they need to complete homes.”

Inflation and supply chain problems are expected to lead to higher construction costs. Prices for building materials are already up 22% year over year, says Dietz. Lumber is up 40% in the past 13 months, while a popular kind of particle board used in construction rose about 60% over the same period. Those costs will be passed along to new homebuyers.

“We will continue to see that low double-digit growth in new homes prices as we move through 2022,” says Dietz. “It’s going to be a tough year for housing affordability.”